Monday, April 16th:  I have wanted to take a photo of my children in this basket around Easter time every year.  I thought it was perfect timing to do it this year with our Easter baby. 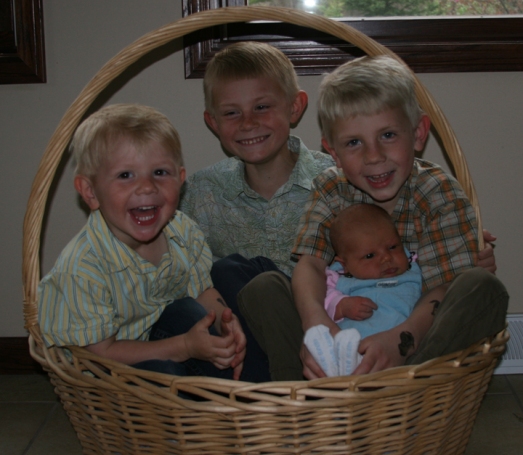 Nola Mae had her one week visit from our midwife, Christie.  Here she is getting weighed. 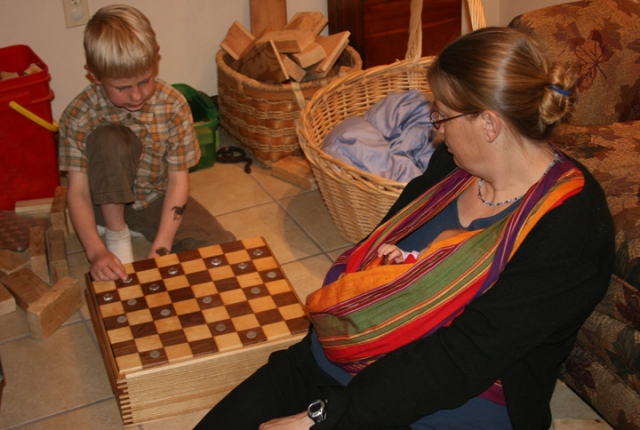 Tuesday, April 17th:  I put these orange peels in vinegar the day we came down with the flu.  We ate a lot of oranges that day (and I haven’t eaten any oranges since getting sick) this is a half gallon jar.  Once the peels have soaked for a couple of weeks I will save the liquid in a spray bottle for a cleaning solution.  Click here for the directions I followed.

Henry “making somefin” for me.  Just a mess for me and a little fun for him.

Wednesday, April 18th:  I was feeling anxious to get out of the house (actually off our property) so we loaded up in the car and went to my friend’s house for a playdate.  It was wonderful for me to hang out with a few wonderful moms and wonderful for Henry to play with other kids.

Thursday, April 19th:  I have been taking these supplements for over a week.  They have been helping me. 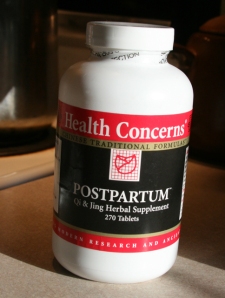 We tried out my pouch sling today because I needed her to breastfeed secretly.  Henry has been wanting to “nuk” every time Nola Mae “nuks”. 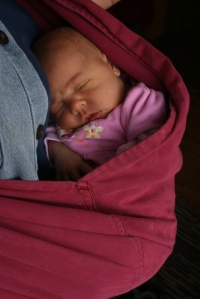 Friday, April 20th:  It snowed over night.  I wished I had the energy to get out our skis to ski around the yard!  The latest we have ever skied was the 27th of April (2008).

I made this pillowcase for Charlie’s friend. 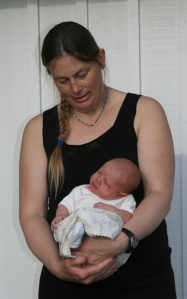 Sunday, April 22nd:  My Step-Mom, Lynn, came for the weekend.  I had a wonderful visit with her.   She spent quality time with each boy and did many jobs for me around the house.   On her last day we took her to my favorite spot, the Big Falls Hydro Dam. 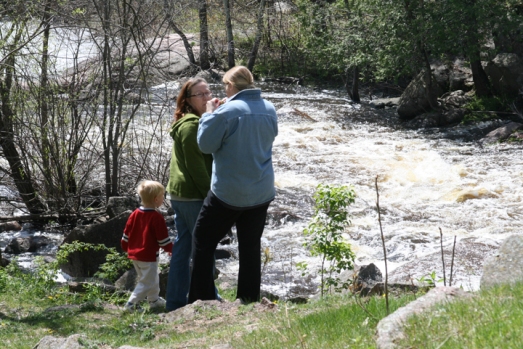 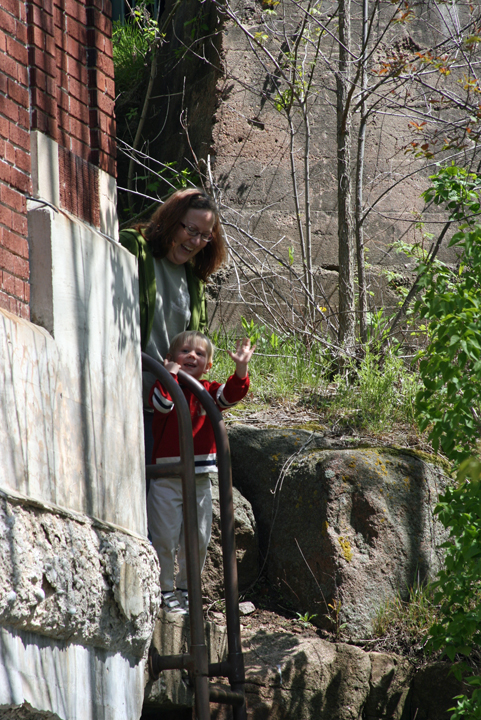 The birth announcement for the newspaper was written by Grandma Helen (A.K.A. Hanna) the family genealogist:

A daughter, Nola Mae Margaret Vater, was born at home on Easter morning, April 8, 2012, to Jack and Jenny Vater of rural Iola, Wisconsin.  The birth was attended by In the Beginning Midwives – Jane Peterson, Christie Woodliff, and Korina Pubanz.

Here is the birth announcement that was made on Facebook by our midwives:

The joy and celebration of welcoming a daughter on Easter morning moved us all.  Her 3 brothers will have so much to teach her, like the biology lesson her brother Henry who watched her coming shared moments later with the vivid details only an amazed 3-year-old boy could tell with such excitement!! And her beautiful name is Nola Mae.

Saturday, April 7th:  Jack woke me up early to take the last belly shot that I wanted because the lighting was perfect.  We didn’t know this was going to be my last morning with my baby belly.

Sunday, April 8th:  Nola Mae made sure she had her own birthday, one day after Henry’s.  I wasn’t too surprised that Henry woke up early enough to witness the birth. 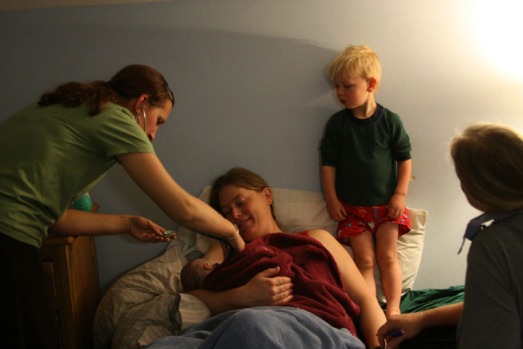 Monday, April 9th:  Today was the last day for Robbie and Charlie’s spring break.  My Mom and Helen were here on this day working so hard keeping the boys busy, cleaning, doing laundry and cooking many meals. 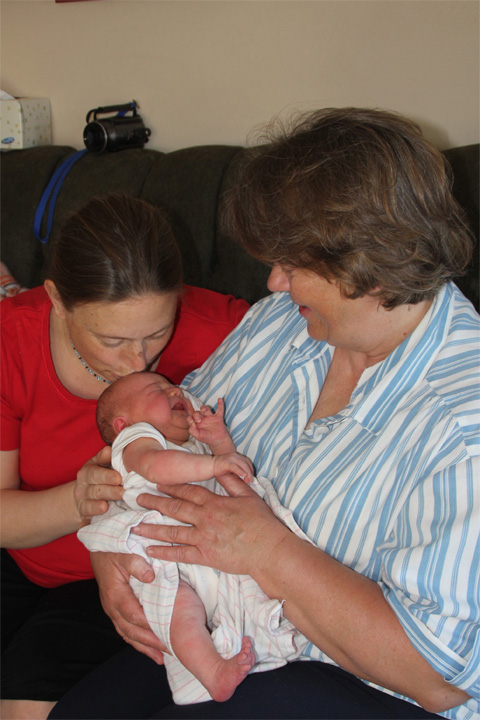 Tuesday, April 10th:  Our boys learned how to Eskimo kiss from Jack.

Wednesday, April 11th:  Our first day out in the sunshine.

Thursday, April 12th:  Henry making sure Nola Mae’s clothes are okay for her to wear. 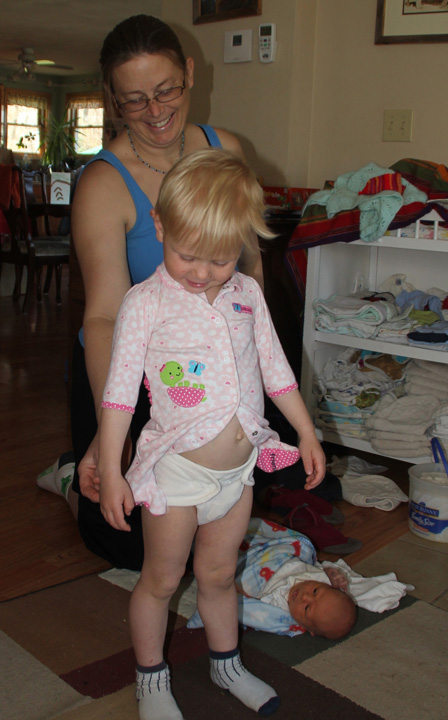 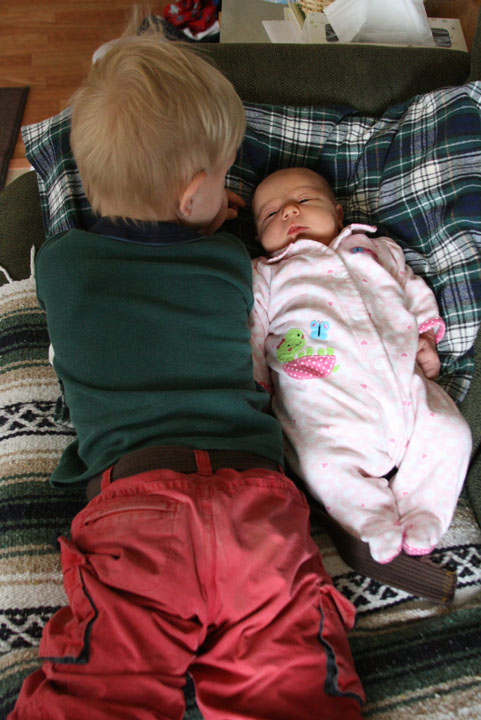 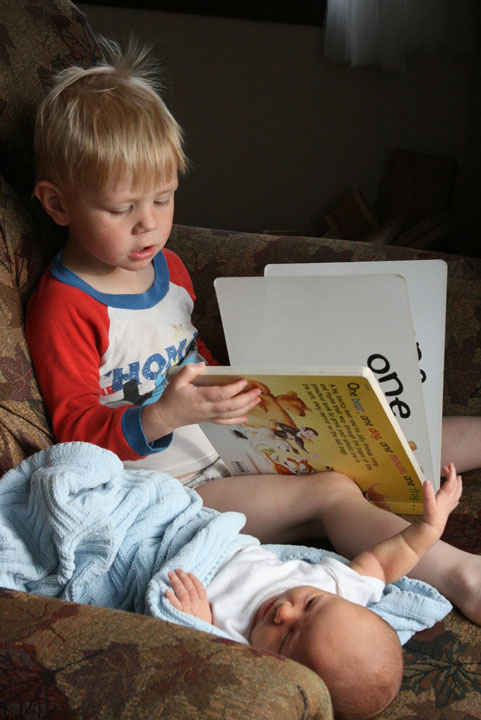 Saturday, April 14th:  My Dad and Step-Mom, Lynn came to visit for the day.  They brought us lunch, played with the boys and we all went for a hike in the woods. 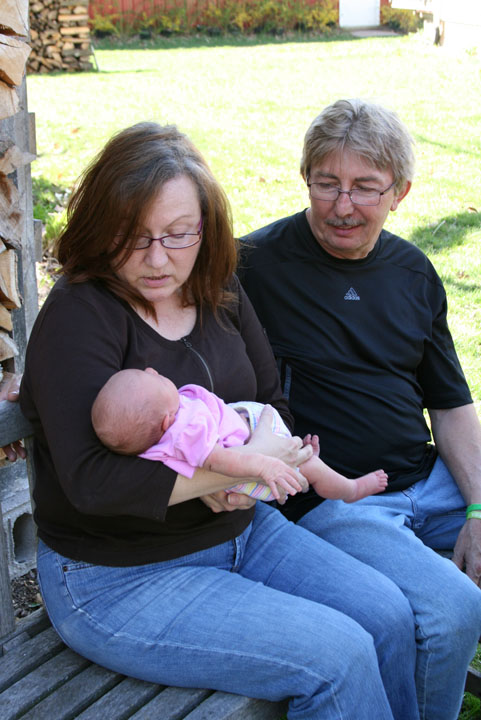 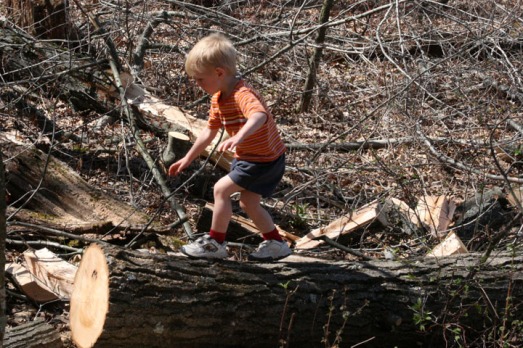 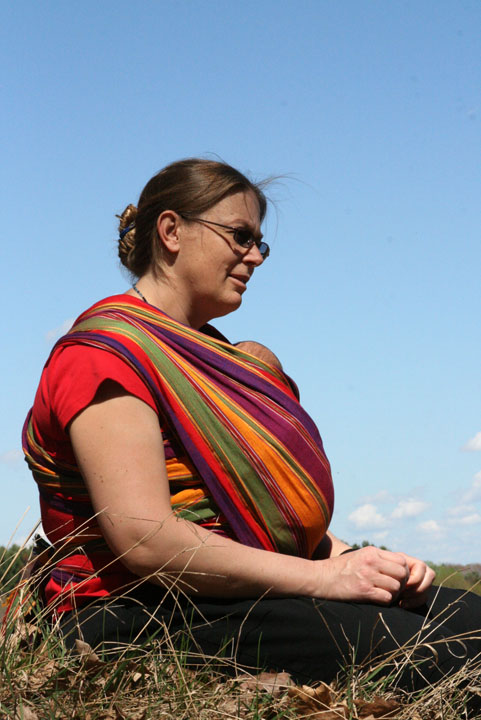 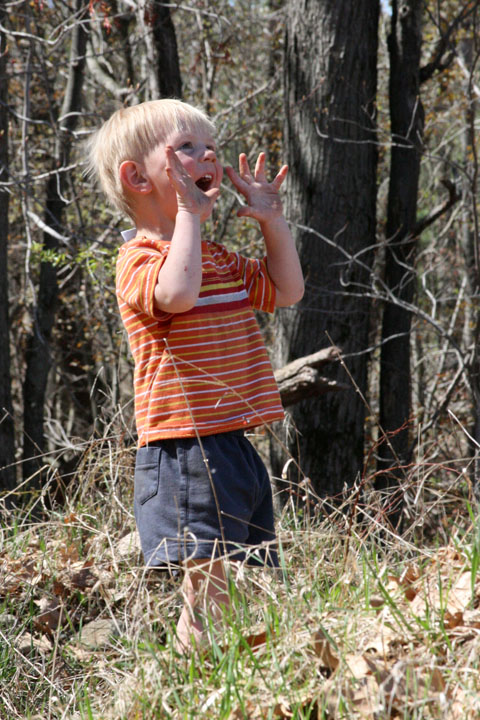 Sunday, April 15th:  Our first time “do two of them” in Henry’s words.

Monday, April 2nd:  We planted peas in the garden today. 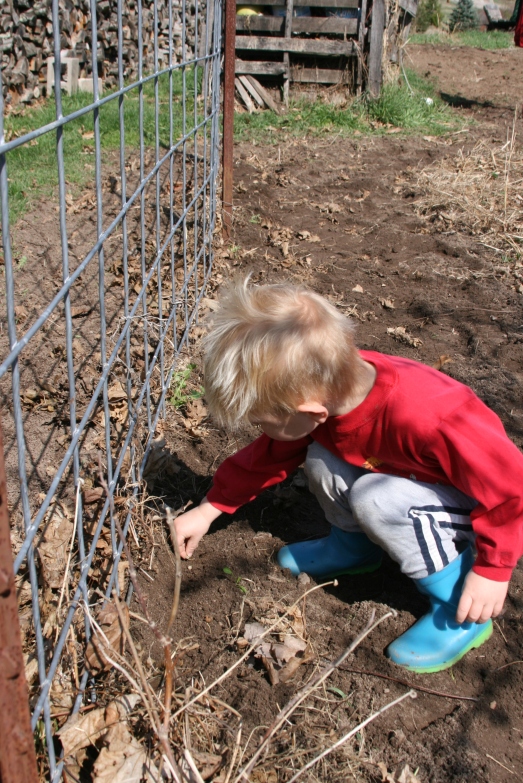 I thought I was having some little signs of labor this evening, so I went to bed early.  Only to be woken up with an upset stomach and the start of puking my guts out began.  Henry followed me a few hours later and then Charlie a few hours after Henry.  We have an awesome bathroom for “camping out” during times of sickness.  This is where the three of us slept – Charlie in front of the washer & dryer and Henry and I slept on the futon covered in many layers of towels. 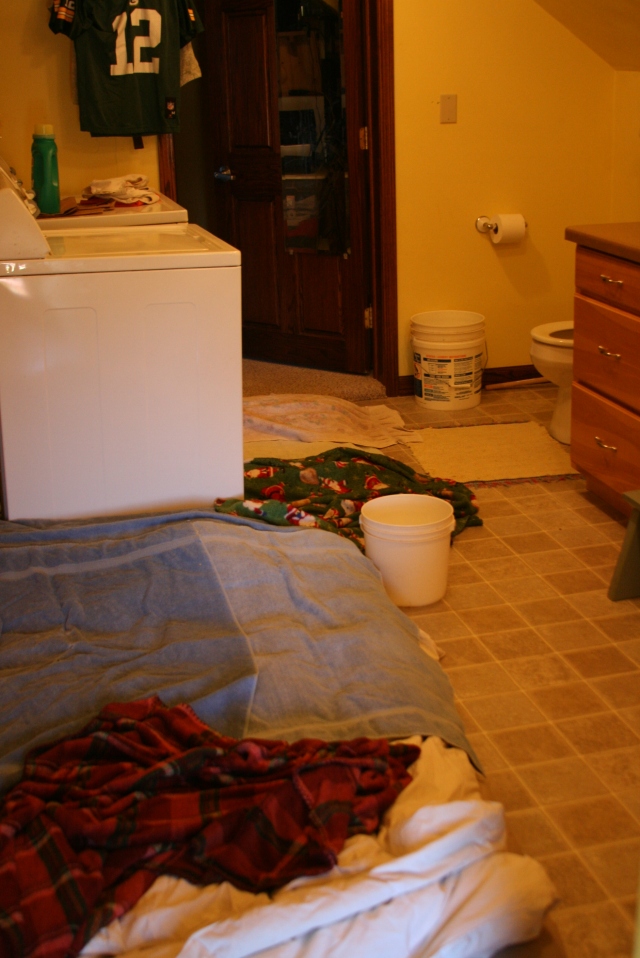 Tuesday, April 3rd:  Henry was cleaning my bathroom window while I did a little bit of cleaning after our night of sickness. 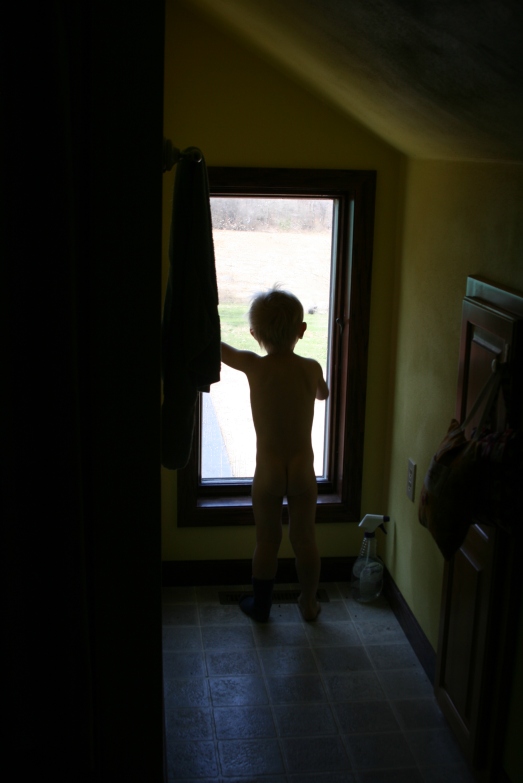 Wednesday, April 4th:  No photos because of our sickness.   It took me a few days to recover from the flu.  I was unable to eat any real meals until Saturday.

Thursday, April 5th:  A family photo after we were feeling better and before the baby arrived.

Friday, April 6th:  The big boys are on spring break.  They colored our Easter eggs. 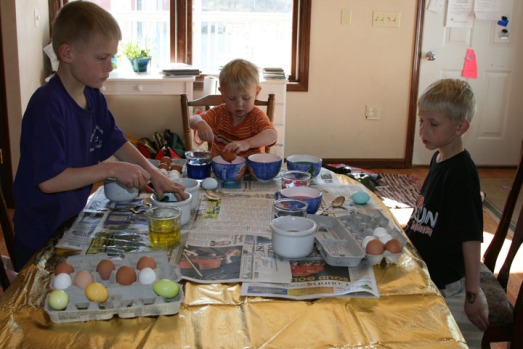 We planted 100 trees.  The real story is that I planted about five, Henry planted one and Jack planted the rest. 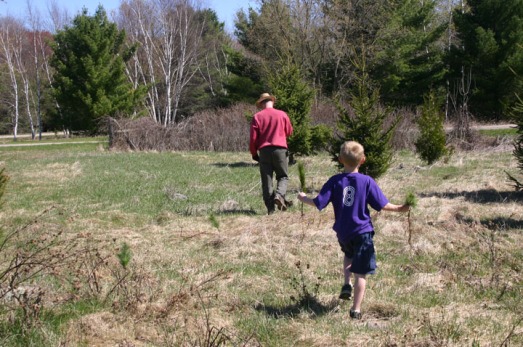 Saturday, April 7th:  Henry’s 3rd birthday.  He was talking all week about getting out his “Happy Birthday Cake” from the freezer.  I am very glad that I made it a couple of weeks ago and froze it. 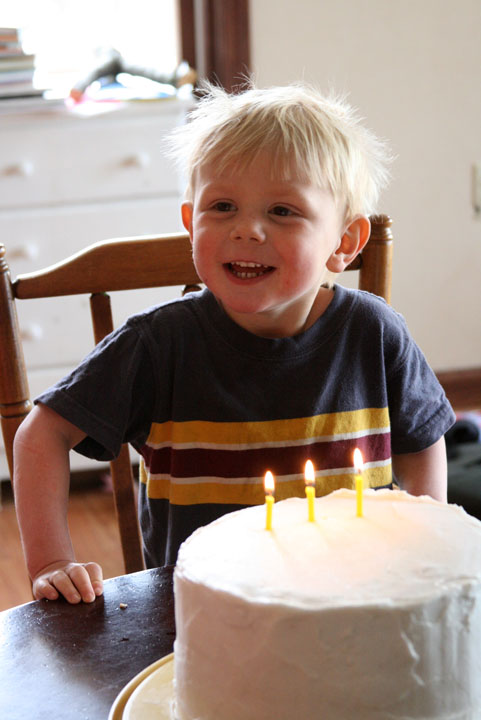 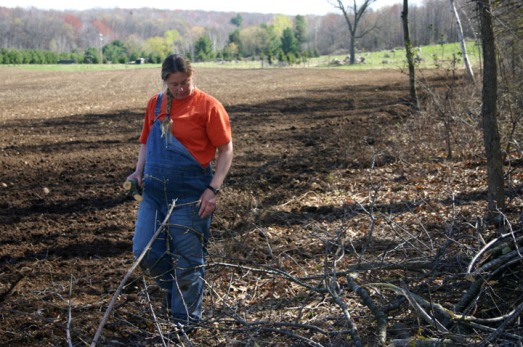 The boys played on the rocks in the pasture.

Sunday, April 8th:  Nola Mae arrived on Easter morning.  I am glad she has her own birthday.