Monday, March 5th:  Henry found some of my skiing and running medals.  He jumped and danced around making them “make music”.

Tuesday, March 6th:  Robbie had his VIP day this week.  He picked out almost 60 photos to share with his class. 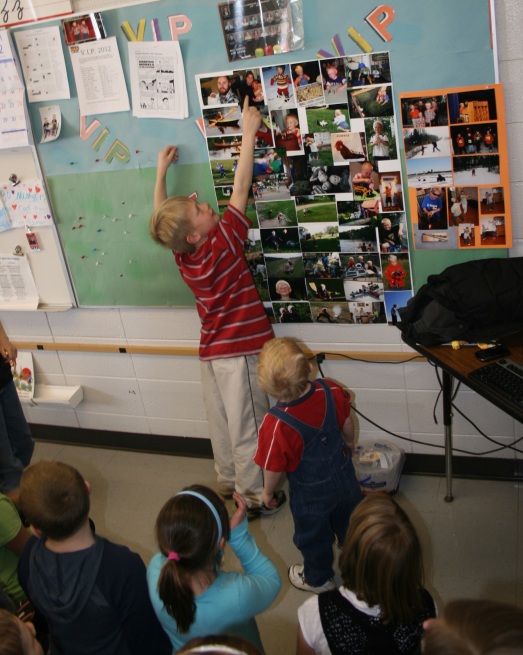 We baked cupcakes for his class to decorate during his VIP time when we came into his class for a special activity.

His classmates seemed to enjoy decorating their cupcake and were very creative.  Here is a volcano cupcake.   Later the boys measured it and this cupcake was 4 inches tall.

Wednesday, March 7th:  We had a friend over and the two boys played a little basketball from the back of the truck in the barn.

Thursday, March 8th:  Breakfast in front of the fire.

Friday, March 9th:  I had my home visit with my midwives, Jane and Christie, this morning.  Many times during our visit Henry told stories of what is going to happen when “the next boy” comes.  During the last couple of days Henry keeps saying and insisting “the next boy.”

Jack finished this wardrobe for his sister. 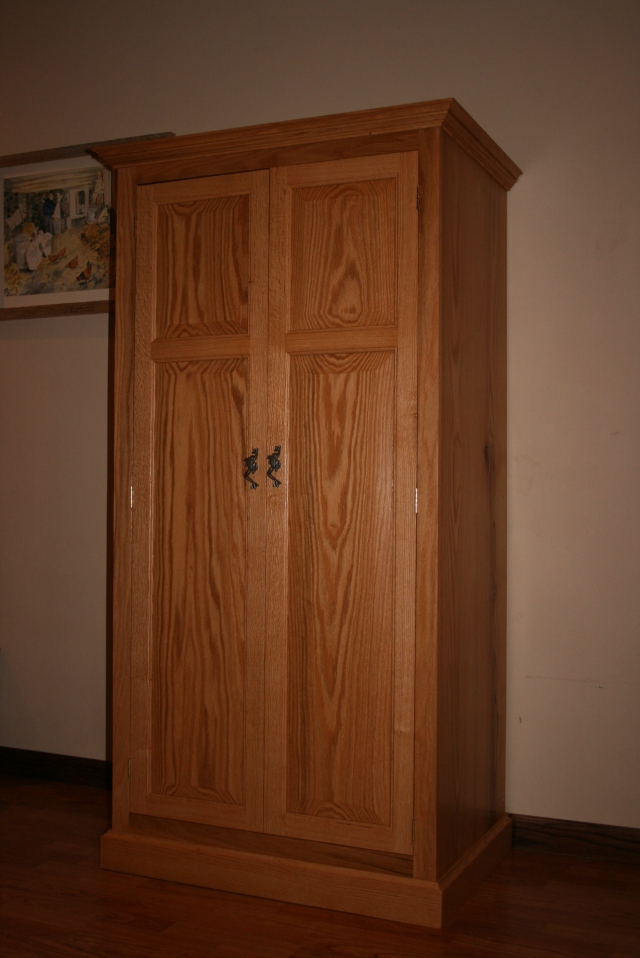 I think I have a new favorite photo of Henry… 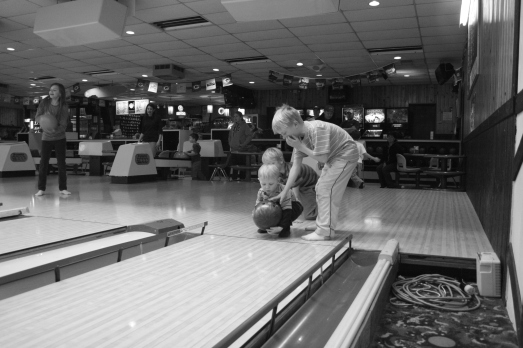 Leftover frosting from Robbie’s VIP day provided the kids with some entertainment. 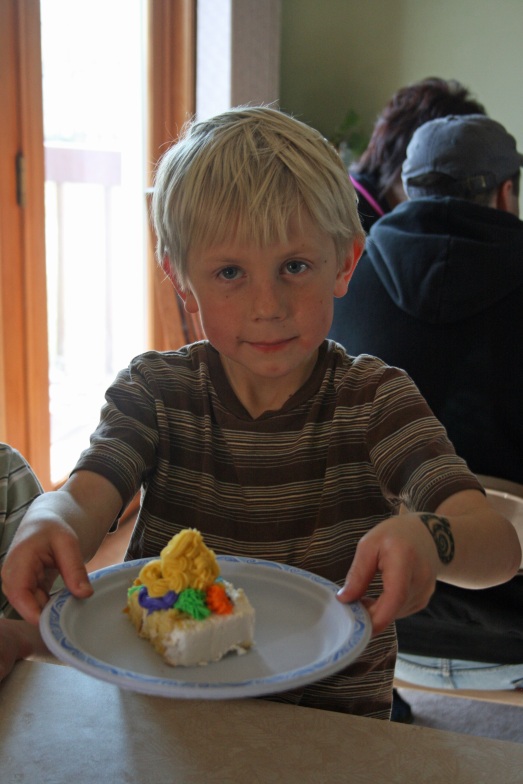 Sunday, March 11th:  The boys have earned a lot of money from reading.  I guess that money was burning a hole in their pocket.  Charlie bought these two lightsabers.  I included three photos of this crazy stuff because their facial expressions are so funny! 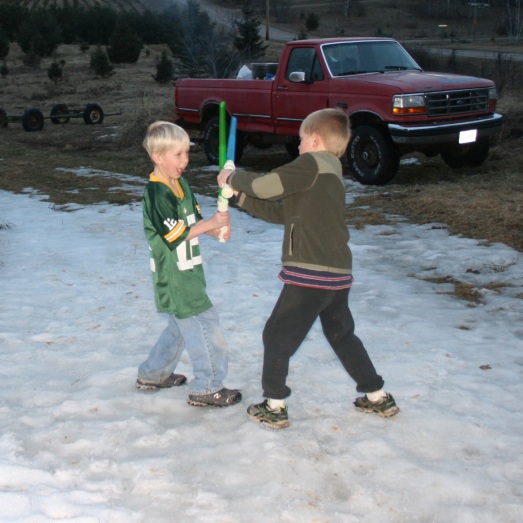 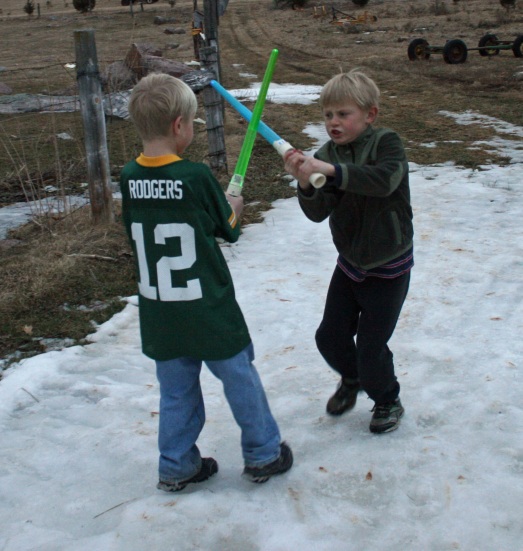 Project 365:  Take a photo a day and see your life in a whole new way.

2/13/11 (Sunday) –  My wake-up crew took pictures of me sleeping, the flash was my wake up call.  I won’t scare you with those photos.  Instead here are two of the four handsome faces I wake up for every day. 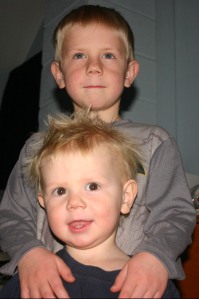 2/15/11 (Tuesday) – I picked this apron pattern from The Apron Book  Making, Wearing, and Sharing a Bit of Cloth and Comfort by EllynAnne Geisel and vowed to myself to follow the pattern’s directions to a ‘T’!

I wanted to prove to myself that I can follow directions,  I FAILED!

Early in the directions I learned the pattern isn’t making this exact apron (matching waist-line fabric and bottom of apron fabric).  The directions were for the apron skirt to be in one piece – no bottom border.  I wanted my apron to look similar to the photo!  I already had my  fabric picked out and my vision was set.  I modified the design. 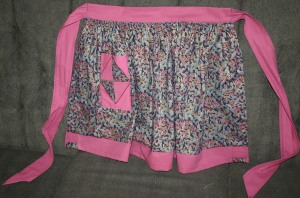 2/16/11 (Wednesday) – Playing outside in the first meltdown puddles. 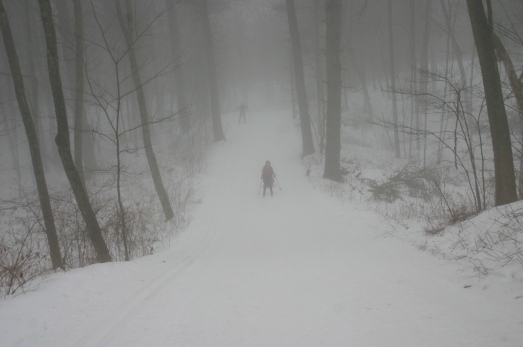 Gym class with Robbie for Jump Rope for Heart,

and a visit to the emergency room.

We took the long way back to the chalet with Aunt Becca.

2/20/11 (Sunday) – Our sledding date was cancelled due to the lack of snow.  Instead we went bowling with our friends.  Jack was the photographer, not a bowler!   (The rest of the photos were taken by Jack)

Later in the day a snow storm arrived.  Our drive home from bowling was a little scary.  Playing in the snow was a lot of fun! 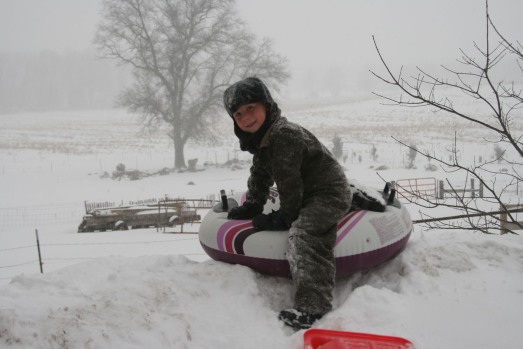 Project 365:  Take a photo a day and see your life in a whole new way.

2/7/11 (Monday) – Robbie is the only Green Bay Packer fan in our house.  Charlie is becoming one only because of Robbie.   On Monday, after learning that the Packers won the Superbowl (because we didn’t watch or listen to the game) Robbie composed a Packer song. 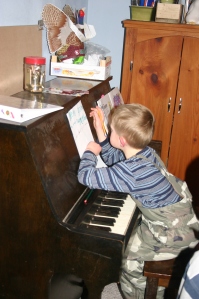 2/8/11 (Tuesday) – Today the older boys got on the bus with our thermometer saying -3 degrees.  When it is cold outside I have a difficult time keeping the house warm with the wood stove so I want to bake.   I made Honey-Wheat Bread.  This is the first time Henry helped me make bread.  He loved the kneading and

But here is one of our night-time snack…blueberry & raspberry smoothies. 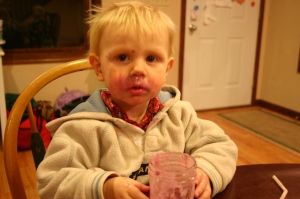 2/11/11 (Friday) – I have been avoiding this sewing project after learning that Charlie wants to turn the shirt that he has designed and sewn into a Packer shirt.  Since Charlie does have some Schroeder blood in him I had to give in to his desire to be a Packer fan.  Grandpa Schroeder would be proud of our boys.   During Henry’s nap-time we made progress on Charlie’s Packer shirt.

2/12/11 (Saturday) –   I like bowling but don’t go very often.  Jack hates bowling so we rarely go as a family.  Bowling is in my blood.  Both my grandfathers were very good bowlers, I have many other relatives that are good bowlers too.   My Grandpa that is still alive is almost 82 years old and is still bowling on four leagues.

This is how the Vater Boys bowl. 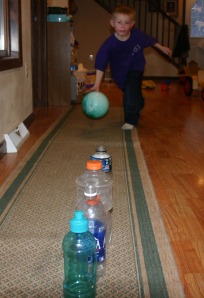