In late January the boys had a two-hour delay for school due to bad weather and then a snow day.

The morning of the two-hour delay caused some craziness.  Every morning if Nola Mae and Henry are still sleeping when it is time to go out to the end of the driveway I walk out there with the boys.  I take care of the dogs.  This morning I turned on the water to fill the horse’s water tank.

I didn’t know there was a two-hour delay until we were outside waiting for the bus by 6:30 and we were waiting for about 10 minutes.  I saw the county bus go by very slowly, usually this bus is going pretty fast.  I realized then that maybe the wasn’t any school because the roads were probably too bad.  I went into the house to check the school’s website.  In all this craziness I forgot about the running water in the barn.  The nice thing about our old barn and the placement of my water tank is when it overflows most of the water goes to the stairs.

After the two big boys were off to school I scooped the water out with the 5 gallon bucket and the grain shovel.  If I didn’t wear my baby I am not sure when or how I would have gotten this cleaned up.  I was concerned about it freezing and needed it to get cleaned up right away!

When we had a snow day I was thinking ahead so we made Valentine cards for school.  I refuse to buy the crap that is in the stores.  I cut hearts of all sizes and all three boys glued and colored whatever they wanted, signed their name and we taped a small package of Smarties or a sucker on each card. Thanks to Granny we had a good supply of Smarties!  Henry signed all of his with one big “H”, up until this time I didn’t know he could write an H.  He saw the boys writing their names and he told me he could do his.

The innocent playing on the kitchen stool has turned dangerous.  Remember last month’s cute photos?  Now, I put the stool away and only bring it out when we need it.

Henry’s preschool does a cake raffle at four high school basketball games as a fundraiser.  These are two of the three cakes I made.  The preschool raised a total of over $400.

Henry has watched us play Battle Ship.  On this day he was set on filling every spot and not interested in getting up until he was done. 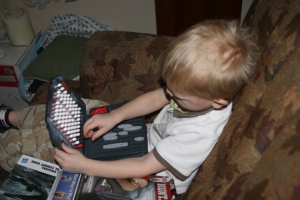 I heard the piano keys being played.  I stopped what I was doing in the kitchen to tell Henry how beautiful and gentle his fingers were playing and found Nola Mae standing at the piano.

Henry thinks she needs to sit down to play and put her on a chair.  Nola Mae likes it. 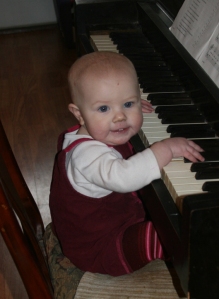 My friend, Asherrie’s mom made this little hair hat for Nola Mae.

We have had excellent skiing this month.

A snowy day made it a lot more work to ski and pull the sled.  It is a good thing Nola Mae sleeps the whole time because on this day she wouldn’t have been able to see out of the sled.

Henry’s skiing skills improved drastically in a week’s time.  He went from me skiing next to him while going down hill, and skiing behind him doing the “duck walk” up the hill to him climbing up hills and zooming down hills all by himself.  He has also gotten stronger during the month of February.  We always went on the green loop.  By the end of this month we going out on the blue loop.  One day he skied for over 1.5 miles.  And another day he skied the entire blue loop (distance?) in 1 hour 45 minutes.

I had a few days where Henry would ski as far as he could and when he would get tired I put him in the sled with Nola Mae.  They would both fall asleep within 10 minutes and I could ski as long as I was able to.  On this day I didn’t bring any water with me and had to go back after 1.5 hours.  They could have napped longer and I could have skied longer!

Aunt Becca came to ski with us during one of our Saturday morning lessons.  The youth ski group skied to the shelter on the green trail for hot dogs, hot chocolate and the reading of  the book called The Race of the Birkebeiners.

Three of my sisters met at my house for skiing and visiting.  While they were here it was too beautiful to be inside.  I got the boys out to try to do some sledding.  Kayla and Skyler came outside to play with us and they had an idea to make a snow fort.

The snow fort started to lean when the temps warmed up.  Notice the leaning sides of the fort.

The day before it fell to the ground.

During this same weekend the youth ski group skied our re-enactment of The Race of the Birkebeiners where the kids brought their babies or stuffed animals and carried them on a special trail that I had groomed for them.

I had someone interested in buying my Ellaroo wrap.  This was my first wrap.  I haven’t been using it very often so I considered parting with it.  We wrapped with it and I decided I couldn’t sell it just yet.

Nola Mae doing “The Big C” and still staying in the wrap! 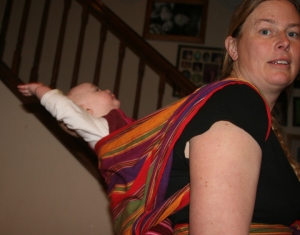 I made this ring sling for myself after finding out that I like the ease of getting Nola Mae in and out when going places.

I got this wrap hammock idea from my friend, Brianna, the one who got me into wrapping.  She has made forts, swings and hammocks with her wraps.  Charlie’s friend rode the bus after school to work on her science project with Mystique (Click here to see her mom’s blog post). 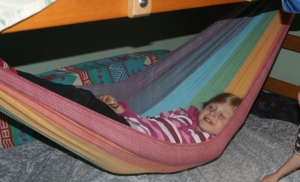 Charlie and Robbie took turns sleeping in the hammock. 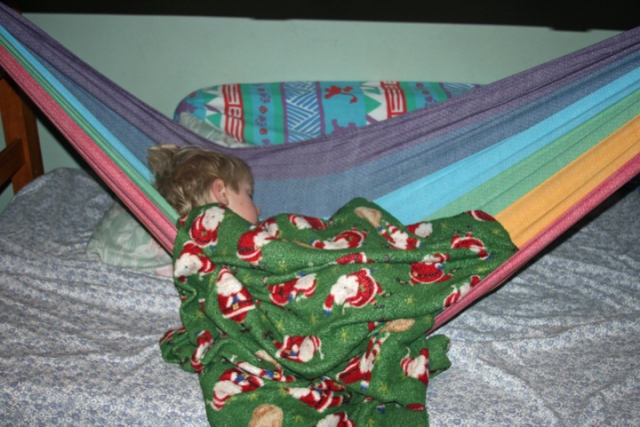